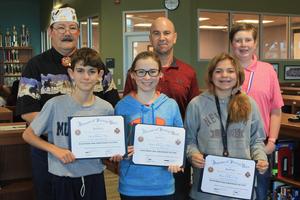 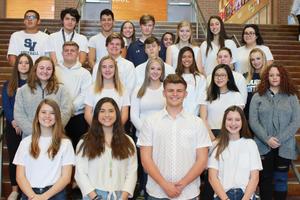 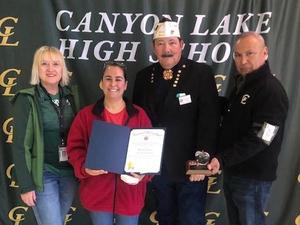 Learning to express ideas, opinions and feelings with the written word can be a powerful tool, and the VFW gives students across the nation an opportunity to hone their writing skills through its annual Patriot's Pen and Voice of Democracy contests for middle and high school students.

Annually, students in the Comal Independent School District participate in the VFW Patriot’s Pen and Voice of Democracy contests, and the authors of this year’s winning entries were honored with cash prizes, awards and certificates by the Startz Memorial VFW Post 8800 in December.

The VFW Post 8800 also recognized two Comal ISD teachers with teacher of the year honors including Tommy Hines, a social studies teacher at Smithson Valley Middle School, and Erica Naud, an algebra and geometry teacher at Canyon Lake High School. They were each given a cash prize and plaque for their honor.

The Veterans of Foreign Wars sponsors both of these contests annually, partnering with schools across the nation. This year’s theme is “What Makes America Great.”

SVMS students have been participating in the Patriot’s Pen contest for six years. History teachers at each grade level encourage all students to participate.

While the Patriot’s Pen contest is for middle school students, the Voice of Democracy contest is an audio-essay submission for high school students who not only write an essay but record it as well. Smithson Valley High School students have been participating in this contest for 16 years.

This year, SVHS students submitted 24 entries with senior Koby Suggs placing first, senior Kailey Fox placing second and freshman Kyra Fox and sophomore Mikayla Lively tying for third. These students are members of the SVHS Competitive Oral Interpretation class which is taught by Gloria Wolfshohl who was honored last year by the VFW as a teacher of the year.

Wolfshohl was honored to be chosen along with another teacher to serve as the grand marshalls for the July 4th Startzville parade.

“The experience was humbling and memorable to ride with the veterans on their July 4th float,” Wolfshohl said. “Words cannot express what it was like to hear the hundreds of people thanking them for their military service.”